This website is dedicated to helping the public realize that wireless internet, or WiFi, emits radiation that causes a myriad of serious health effects, including damage to DNA, cancer, and infertility. Research shows that autism, ADHD, and other behavioral problems are also associated with wireless radiation exposure. Many scientific and medical experts have issued warnings because of the evidence before them.

Solutions are readily available. Computers in schools can be connected to the internet via wired technology, which does not emit RF microwave radiation, and is both faster and more reliable.

WiFi emits RF radiofrequency microwave radiation. Both wireless routers and wireless computers contain transmitters that send information back and forth through the air. Microwave radiation is able to penetrate walls made of wood, metal, and concrete. It can also penetrate our bodies.

There are literally thousands of peer reviewed studies, conducted in laboratories and field studies from around the world, that show wireless radiation to be harmful. Document on Genetic Damage To Girls

Exposing the myth that WiFi emits low levels of radiation:

In 2007 the UK Health Protection Agency stated that a person could spend a year in a WiFi hotspot and only absorb as much radiation as a 20 minute phone call. This was blatantly misleading.

In 2012, after reviewing the scientific literature, the Italian Supreme Court ruled that cell phones cause cancer. The gates were thus opened internationally for legal cases involving cell phones. In 2013 an Israeli cell phone company settled with a customer who developed brain cancer.

Given that iPads and other wireless devices emit as much or even more radiation than cell phones, and children in wireless classrooms are using these devices for much longer periods of time, it would be expected that these children would suffer from a much higher risk of cancer. 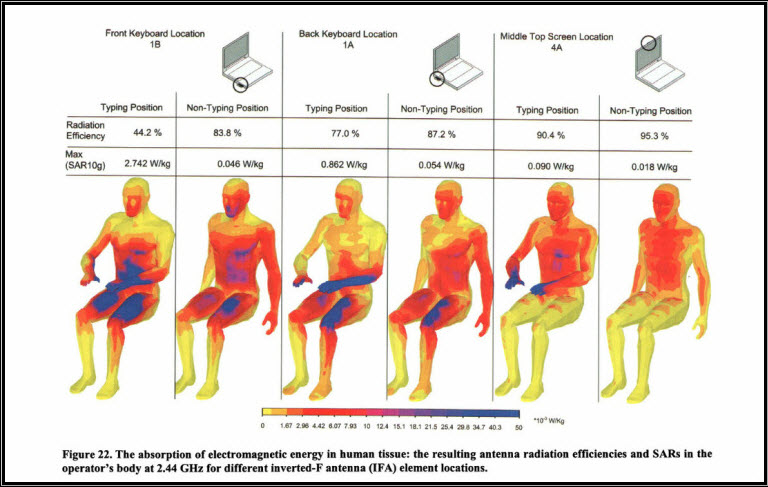 Children are much more vulnerable

Children are much more vulnerable to RF microwave radiation due to their thinner skulls, undeveloped immune systems, rapidly dividing cells, and higher water content. The following image shows how much deeper the radiation penetrates a child than it does an adult. Children are not just little adults, they are much more sensitive beings.

Connecting the Dots
Recognizing the Symptoms of Wireless Radiation Sickness

Children Speak Out on WiFi Symptoms

Wireless Radiation is Everywhere, So Why Bother?


WiFi radiation levels are not the same everywhere. The radiation drops off greatly with distance, so if your neighbors have WiFi, and you get their signals, the levels 100 feet away from a transmitter will be very low compared to if a WiFi router is 10 feet away, or if a WiFi device is right in front of you or in your child's lap.

We Can Reduce Our Children's Exposure Enormously

Although we can't eliminate all wireless radiation exposure, by turning off the WiFi we can greatly reduce what our children are absorbing where they spend most of their time - at school and home.

Taking Action to Protect Our Children:

Wireless technology is so popular and enticing that schools are rapidly moving toward replacing textbooks with WiFi computers. Schools won't look at the research, won't give it consideration, and certainly won't make any changes without substantial public pressure. This industry has too much influence over regulators for this to change from the top down. This is going to take families educating themselves, getting together, and making a stand for the health of their children.

A solution is readily available: Hard wire the computers. Students can still access the technological learning tools without being exposed to microwave radiation.

Note: Schools are incredibly resistant to acknowledging this health information. We have witnessed that administrators will fight tooth and nail to keep WiFi. Before you take on your local school, please read through the FAQ page so we can share with you what we have learned works best.

Carl Sagan On the Dangers of Not Questioning New Technology